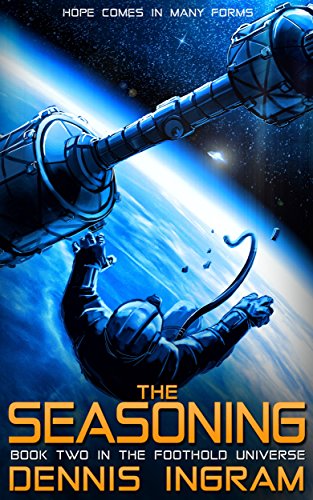 Sixteen years have passed since the eight crew of the Starship Hope arrived in the Tau Ceti system and established a colony on the fifth planet from the star, a planet they named Serendipity.

Their colony has thrived. Together with their children they have turned their habitat into a paradise and begun to terraform the planet.

But none of them realise that another starship carrying more than a hundred people will soon arrive and change their lives forever.

The Seasoning continues the story started with Foothold, picking up just before the starship Inspiration arrives at Serendipity.

Hope comes in many forms.

Interview with the author

Is this the original edition?
No, it was professionally re-edited in August 2016.

How would you describe The Seasoning?
Book 2 in the Foothold series picks up the story sixteen years later. This time adversity and conflict follow in the wake of the Inspiration’s arrival.

Will there be a cliff-hanger?
The ending is left open for the next book, but I won’t leave you hanging.

How many books to come?
The series will have eight or nine books in three broad arcs. The Seasoning is the middle book of the Serendipity arc.

If it were a movie, how would you rate it?
PG-13 for language and sexual references.

You may have missed